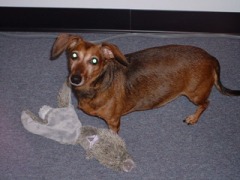 UPDATE  - Jessica Marie Katz (my dog) was a Fighter!  She passed away from complications with pneumonia Sunday, Sept. 13, 2009.

She lived a very spoiled life.  I did everything humanly possible to help and encourage Jessica.  I believe it is what gave Jessica the strength to pull through the disorders and fight until the end.

I feel so blessed God has given me a chance to share my life with Jessica.

Please if you would help us spread the information on these immune disorder to all dog and cat parents.  Thrombocytopenia and Auto Immune Hemolytic Anemia affects dogs, cats and humans.

BEWARE!  AUTO - IMMUNE HEMOLYTIC ANEMIA or THROMBOCYTOPENIA -  A COMPLICATION WITH THE IMMUNE SUPPRESSANT DRUGS IS PNEUMONIA SETTING IN.  IMMUNE SUPPRESSANT DRUGS ARE JUST THAT THEY KEEP THE BODY FROM DEFENDING ITSELF AGAINST INFECTION.  ALSO USING THE SAME ANTIBIOTIC FOR A LONG PERIOD OF TIME THE BODY BECOMES IMMUNE TO IT.  PLEASE ASK YOUR VET TO ALTERNATE THE ANTIBIOTICS TO GIVE YOUR DOG A BETTER CHANCE OF SURVIVAL.

Jessica's Immune System Takes a Second Hit!  On Nov. 21, 2008 late in the evening around 8:30 pm, was rushed to the emergency room she was extremely anemic.  Jessica's gums were gray in color Jessica's teeth looked like teeth you would find on a skeleton.  There were no visible blood vessels in Jessica's eyes.

I notified the vet on duty of her previous run in with Thrombocytopenia in 2001.  She put Jessica on a high dose of prednisone immediately sulcrafate and pepcid with famatine to protect the stomach.

The next morning  Dr. White diagnosed Jessica with Auto-immune Hemolytic Anemia the opposite of Thrombocytopenia.  Dr. White also put Jessica on Cyclosporine to give Jessica time until the prednisone could kick in.

The treatment is the same. Usually this does not happen twice. 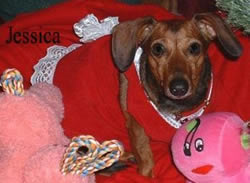 We thank Dr. Wohl & crew at Auburn, AL. and Dr. White & crew at Country Clinic in Toney, AL. for their devoted care.

on Sept. 11, 2001 late in the evening around 7:00 pm, Jessica's (my dog) life fell apart, which devastated us. Jessica (dog) began bruising all over her body. Every time we touched Jessica it left hand prints literally. It happened suddenly.

We called our Veterinarian but they were unavailable.  We then called the only 24 hour emergency vet in the area.  He was 45 minutes away.  They were waiting for Jessica.  The doctor immediately took blood.  He already guessed Jessica had Thrombocytopenia.  Thrombocytopenia is a disorder in which the number of platelets (a type of blood cell) is abnormally low, sometimes associated with abnormal bleeding. Causes are poisoning, allergies, or idiopathic (unknown).

Jessica (dog) had always had a reaction to her shots, but one week prior to Jessica getting sick we had put Hartz brand top spot for fleas on her.  We are unsure what caused this to happen, the shots or the flea treatment.

The blood tests confirmed that it was Thrombocytopenia.  The doctor administered some medications called doxycycline and prednisone.

The next morning Sept. 12, 2001 at 7:00 am, he released her to us.  But we had to take her straight to our vet Dr. White at Country Clinic.  Once we arrived, Dr. White took Jessica and administered doxycycline 100 milligrams and prednisone 20 milligrams again.  Jessica was hanging in there.

By that afternoon Jessica (dog) was stable.  Dr. White figured she probably could go home in the morning.  I had planned on picking Jessica up early.  So my husband could see Jessica before he left out of town.

Sept 13, 2001 at 9:00 am, I arrived at the clinic to pick up Jessica (dog).  I was crushed my baby girl was on two i.v.’s looking very weak.  I asked what was happening.  Dr White pulled me out of the room.  He said, “There is nothing more we can do!”  They had tried to give Jessica Vincristine-chemotherapy.  Nothing was working.  Dr. White told me they had exhausted there options.

Then Dr. White had an idea.  He said if we could get Jessica to the Auburn Veterinary Hospital.  She may have a slight chance but it was less than 50%.  We told him whatever it takes.  We did not care about cost.  Jessica was part of our family.

So he called Auburn Veterinary Hospital.  They said they would be on standby.  It took us only 3 hours to make a 4 ½ hour trip to Auburn, AL.

We finally arrived at Auburn Veterinary Hospital.  Dr. Bellhom and Dr. MacEntire with team verified the diagnosis and immediately administered a blood transfusion to buy time so Jessica's immune system could have time to react to the prednisone treatment.

We stayed for a little while till they got Jessica situated.  Then we went to a motel.  I was not leaving her.

In the morning on Sept. 14, 2001, we went back to the hospital to see Jessica (dog).  They brought Jessica (dog) to us.  So we could visit while waiting for the doctor.  She looked so fragile.  She had not eaten since Sept. 11.

The doctor came in and told my son and me that Jessica (dog) only had a 50/50 chance to live.  I told him “Do whatever it takes to save her!”  He said it would be costly and he could not guarantee Jessica would make it.  I told him I did not care.

We visited for a little while longer.  Then, they took Jessica back and we left.

On Saturday Sept. 15, 2001, we went again in the morning to see Jessica (dog).  They brought her in to see us.  Jessica was slipping away fast.

Then a new doctor, Dr. Wohl, came in.  He proceeded to tell me that Jessica (dog) still only had a 50/50 chance to beat this.  I know he probably thought I was crazy, because and I could not stop crying.  I had not eaten in days.  It just made me sick to my stomach that something so horrible would happen to our baby.  I told him how she was a like a child.  That are animals are not property but like children to us, part of our family.  I proceeded to tell him some funny little stories about Jessica and that I would be there every day by her side until Jessica was better.  She seemed to be fighting to live.

They continued to keep Jessica on fluids, doxycycline 100 milligrams and prednisone 20 milligrams and other meds.  They also sent Jessica to have x-rays, a bone marrow test and ultra sounds.  Where they determined Jessica's stomach was completely black and bleeding internally and no sign of cancer.

We went back that evening to see Jessica (dog).  She was still getting worse by the hour.  Dr. Wohl told us he was trying to determine what to do next to by more time.  Jessica (dog) was not producing enough red blood cells or platelets to stay alive.  He thought about another blood transfusion but he did not think it would buy enough time until Jessica’s immune system could to react to the prednisone treatment.  So he suggested a new solution called oxyglobin (imitation blood).  So new it had just become available on the market.  We agreed to go ahead.

Come Sunday Sept. 16, 2001, they had already administered the oxyglobin before we arrived.  When they brought Jessica (dog) into see us she seemed so much better.  Dr. Wohl proceeded to tell us that she was only feeling better because of the oxyglobin.  And that he was hoping it would buy enough time for Jessica's immune system to react to the prednisone treatment.

We visited with Jessica for a while.  We always brought her favorite toys.  It always seemed to help.  We also tried every day to get Jessica to eat with no luck.

On Monday morning Sept. 17, 2001, Jessica (dog) was at deaths door.  When we arrived the doctor told us we could visit only for a couple minutes.  He said he was hoping Jessica (dog) was going thru a condition called Disseminated Intravascular Coagulation (DIC) and not dying.  DIC is a condition in which there is over stimulation of the body’s clotting and anti-clotting process in response to disease or injury.  This condition is when the body shuts down and blood clots take over the organs.  Then, hopefully with the help of the medications the body kicks back in again.  Then we try to help it repair itself with treatment.

They brought Jessica in to see me.  She looked horrible.  She was uncontrollably jerking as if having a seizure.  She was there but not there.  I tried to hold Jessica but it was if she was leaving me.  I had to let her go back with them.  It just ripped my heart out.  They told me to call them later to check on her.

I will tell you one thing people may think I am crazy but there is a one God for all life.  I left the hospital with my son.  I was going to do all I could to help her fight.  I stopped at the first church (Auburn United Methodist Church, Auburn AL) I could find.  I went in and asked for the Preacher.  A young man came out an associate of the ministry.  He explained who he was.  I was so upset and my memory is blurred but this man took me back to his office.  I explained that I new this situation was unusual for him but I needed him to pray with me for God to spare Jessica’s life or at least not let her suffer.  He then prayed with me for Jessica (dog).  To this day I thank him deeply because when I got back to the hotel an hour later, I received a call.  It was the hospital.  Jessica’s immune system had finally started reacting to the treatment.

Jessica continued the next few days to slowly improve except for one allergic reaction to one of the medications they were giving our dachshund that they discontinued.

We stayed at the hotel for 7 days, until Jessica (dog) was out of the woods so to speak.  Then my son and I went home.  I continued to drive to Auburn every day for the next 5 days to be there at 12:00pm for visitation.

We had to go every week, then gradually every two weeks to once a month a trip to see Dr. White for CBC.  A CBC is a blood test that actually shows you how many platelets, white and red blood cells you have.  By comparing them you can tell if your body is producing the right amounts.

It took months to help rebuild her immune system.  For 14 months, she was under continuous medical treatment. She could only go outside in a small fenced in area or playpen.  We had to continuously bleach the area to make sure our dachshund would not get sick.  After they had only given our dachshund a 50% chance to live, Jessica’s treatment ended January 2003.  Jessica had succeeded to heal.

The prednisone is to us a miracle pill.

Prednisone (a Steroid) is a popular drug that does a wonderful job in helping a dog deal with allergies, joint problems and many other ailments.  A veterinarian must prescribe it.  The dosage is usually according to weight.  The prescription usually is doubled in the beginning to get it into your dog's system quickly.  Then it is leveled off to “normal” according to the dog’s weight.   Then once the allergies are under control your pet is gradually weaned off the steroid.  Sometimes a veterinarian may require blood work while a dog is on this steroid.